The thirtieth Day of Champions, again held on the Thursday before the British MotoGP™ turned out to be extra special start to the race weekend.

The sunlit morning saw 150 bikers whizzing through golden countryside to the track, thrilled to become some of the first to take to two wheels on the new Silverstone asphalt. To mark the special occasion Dorna opened the paddock to more racing fans, giving 200 more people the chance to see behind the scenes of MotoGP™. 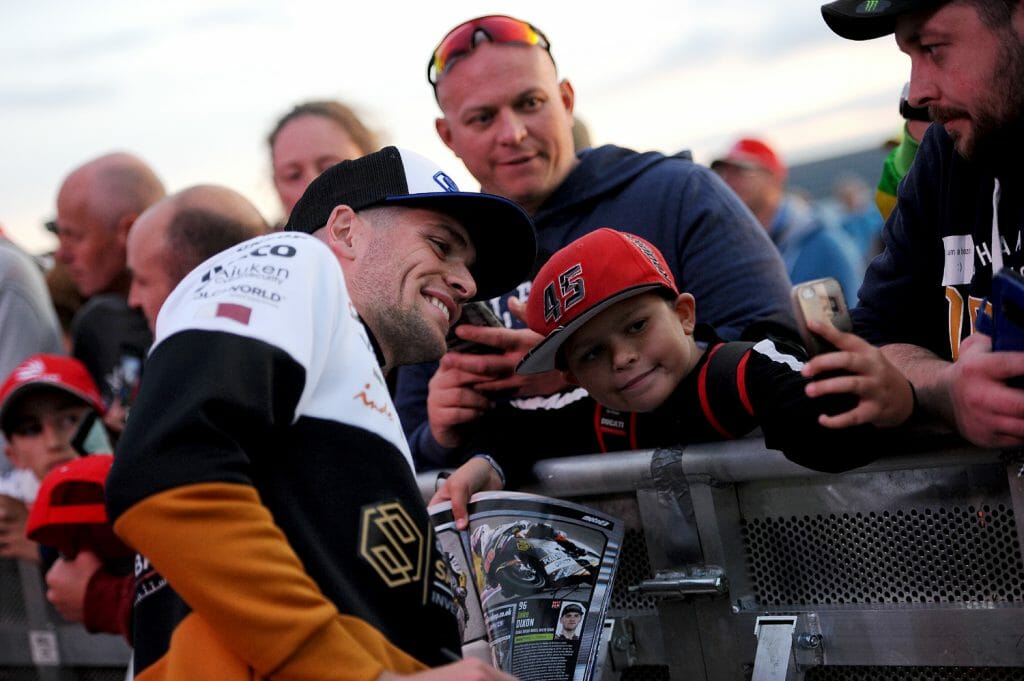 Jake Dixon has a selfie with a young fan

Led by Matt Roberts, the live stage show got the lively crowd – a sea of fans with t-shirts heavily peppered with neon 46s but representing every aspect of the motorcycle world – involved more than ever. Riders hopped down into the crowd for selfies and presenters dished out giveaways and took questions from the audience.

As usual this was an opportunity for racing fans to see a different side of their heroes. After his Texas Tornado Boot Camp Experience raised a whopping £4400 Colin Edwards whipped off his shirt and sold it for £300. The audience also got a peak of Andrea Iannone’s behind as he flashed a quick moony at the crowd, too fast for even the photographers to snap!

Colin auctions an experience as well as the shirt off his back!

Bought by the husband of mega Valentino Rossi fan Rose Carter as a birthday present, this year’s selfie with Valentino Rossi sold for £3100. After a clearly overwhelmingly emotional moment with Vale on stage Rose commented tearfully ‘I’ve been waiting 20 years for this’!

Rose Carter’s selfie with Rossi, which her husband paid 3100 for at the Day of Champions auction

Other notable auction items were LCR Hospitality for race weekend (£3,400),  the chance to accompany a MotoGP™ photographer for a weekend at a European race (£2,200) and a signed Replica Rossi Dainese helmet (£7,100).

If you were there you might even spot yourself!

Be the first to hear about auctions, events & competitions PLUS get 10% off in our shop.

Find out who the lucky winners of the Yamaha Motor for Riders Prize Draw were.

We've got some very exciting items up for grabs in our 2023 MotoGP™ Holiday Auctions. Perfect for the racing fan in your life.

We are over the moon with our new for 2022 Christmas cards, designed by one of our favourite motorcycle artists Ryan Roadkill, and with all proceeds supporting our charity.