Visitors sometimes draw comparisons. It’s a bit like the Yorkshire moors, say the British ones. Very much like Wyoming, say the well-travelled Americans. Very much like the highlands of Aragon, or of Almeria, say the Spanish ones.As they climb higher, as the truck struggles more, as the roads give up and the goats take over, the truth dawns. There’s nowhere quite like this.

Not like this in a number of ways. ‘Stunning’ is a popular word these days. You hear or see it everywhere, from cookery shows to travel brochures. Of course the scenery of Lesotho is stunning. But even more stunning is the experience of the people who live in it.

In the first village that Maria and the visitors visited there is beautiful singing, stitched and refined into three and four part harmonies polished over hundreds of years. They are singing because for an hour or so, their isolation is over. Visitors have come, to say hello and to understand. Under another tree stands a motorcycle, a Suzuki. Among the visitors is the rider, who is actually a frequent visitor to the village.

She is Mahali Hlasa, the Riders for Health programme director for Lesotho. One of the programmes that Two Wheels for Life supports with money raised at Day of Champions and elsewhere. She speaks for a while (in one of the languages of Lesotho, ‘Sesotho’), the headman replies and someone translates. There is laughter. They are pleased, they say, with the care and attention that the ministry of health and Riders give them. If there is HIV/AIDS it is dealt with. Blood samples are collected, the results are returned and treatment is close at hand. 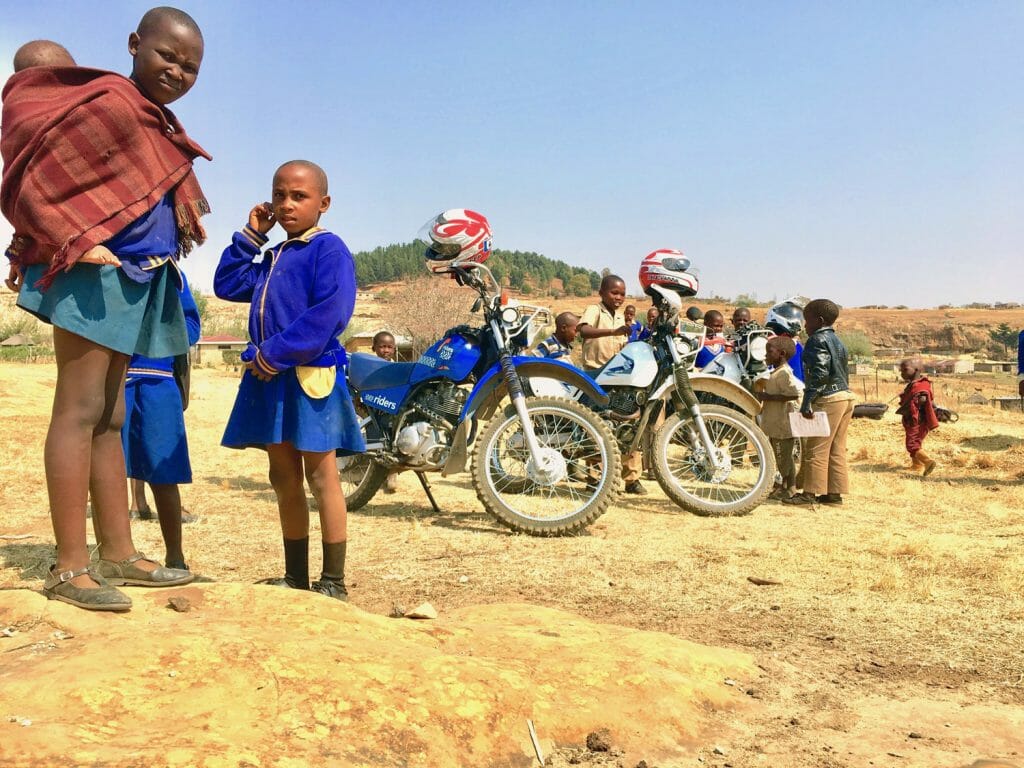 In another village, higher yet, and far poorer, far smaller and with a still more ‘stunning’ view, there was no singing. In a small, uncomfortable hut, a woman was dying. Awful, stunning. But what was she dying of? We don’t know and it matters. If it was AIDS or its buddy everyday tuberculosis, we could lift her, touch her, take her to hospital. But if it were the other TB, the multi-drug-resistant one, we could not. No-one could. There are very strict rules. She would die at a distance, untouchable. MDR TB is so, so much worse than Ebola, so much worse than any plague. It’s a beautiful country. Nowhere like it. Stunning.

Maria Gonzalez came down from the mountains somewhat changed. She could see that what Lesotho needs is more health workers reaching more people, more often. It needs more support, particularly more motorcycles and more ambulances that reach these remote places.

What now? Well, we’ll see you at Day of Champions next year.  Maria and Mahali will be there and so will all the MotoGP riders. And some of us, who have been going to those mountains as well as Day of Champions for many years, will hear, to the tune of one of Bob Marley’s most famous songs…

We’ll all get together; gonna be alright.

Story by Barry Coleman. Barry is a founder of Riders for Health, one of the organisations that run the life-saving programmes we support.

Donate to support our work